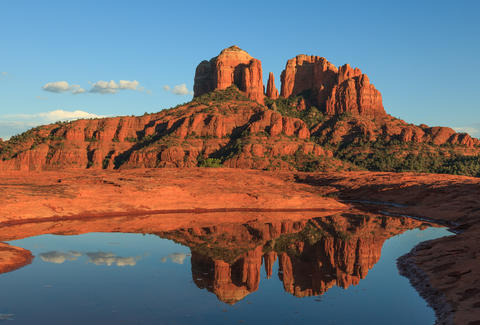 Sedona’s origins begin about 4000 BC when the pre-historic hunters & gatherers roamed and settled in the Verde Valley and Prescott areas.

Between 900 and 1350 AD, the Sinagua began building pueblos and cliff houses. They were skillful farmers and made baskets, pottery and jewelry. They established trade routes with the Pacific Coast, Mexico and Central America.

As the Sinagua moved on, the Yavapai and Apache people moved into the area. The first Europeans explored Sedona & the Verde Valley in 1583 in search of gold. The first Anglo settler in Sedona was not until John James Thompson in 1876. He was lucky enough to find an abandoned garden still bearing crops. Three years later, the family of Abraham James arrived. James had been an acquaintance of Thompson in Utah and he married Thompson’s daughter, Margaret.

A few more settlers came to the Oak Creek Canyon area in 1880. These early settlers lived an uncertain existence, hunting, fishing, and farming only a few acres just to feed their families. They slowly made improvements and the settlers were later able to farm larger and larger areas.

Using water from Oak Creek, the homesteaders raised fruit and vegetables. Peaches and apples were the fruit most widely grown. Every family had a collection of chickens, turkeys, and geese to feed themselves and to sell in Flagstaff, while cattle provided beef and dairy products.

Cattle ranching also played a significant role in Sedona’s history. Herds were driven to high ground on the Mogollon Rim to graze in summer and returned to the Red Rock area in winter. Cattlemen leased grazing right on the National Forest lands.

By the turn of the century, about 15 families lived in the Sedona area. In 1899, Theodore Carlton (Carl or “T.C.”) Schnebly, and his wife, Sedona Miller Schnebly, joined T.C.’s brother, Ellsworth (D.E.), in the Oak Creek Area. T. C. Schnebly was an innovative man, who had 80 acres and a general store and hotel in his home where Tlaquepaque and the Los Abrigados Resort are now located. He saw the need for regular mail service in the small community and organized it’s first post office. He suggested the names “Oak Creek Crossing” and “Schnebly Station” to the Postmaster General in Washington, but both came back rejected because they were too long. Ellsworth then suggested submitting Sedona’s name for the honor. On June 26, 1902, the Postmaster approved the name “Sedona.”

In 1902, John Loy and Ellsworth Schnebly wanted to build a road up out of the canyon. Following an old cow path, it was first called Munds Road. The residents helped build the road. The road today is known as Schnebly Hill Road. This primitive road offers wonderful views of Sedona. Beware – if you are afraid of heights. This road is narrow, steep & windy. If you decide to check it out – drive carefully! Improved transportation gave the settlers access to markets for their agricultural products outside of Sedona. The increased access to the world also allowed tourists to find opportunities for relaxation & recreation in Oak Creek and Sedona. As the scenic wonders and sites of Sedona became known Sedona became a popular place for shooting movies.

The first film shot in the Sedona area was Call of the Canyon, based on Zane Grey’s novel of the same name. This 1923 silent film was shot on location in Oak Creek Canyon near the site of Mayhew’s Lodge. Since then, many westerns and other movies were filmed in Sedona. Stars like John Wayne, Sterling Hayden, Robert Young, Dick Powell, and Joan Crawford came to Sedona to make movies.

Other new businesses cropped up to cater to the needs of movie crews. The movie industry provided a small economic boom for the community as local residents were employed as carpenters, extras and livestock wranglers. To date, nearly 100 films and numerous television productions have been shot partially or entirely on location in Sedona.

The real boom in Sedona tourism came in the late 1960s and early 1970s. Local ranchers sold property to developers. The orchards were transformed into homes designed for retirees while shopping centers and resorts were built for the many tourists flocking to the area. Tourism quickly surpassed agriculture in economic importance.

Today tourism is the largest sector of Sedona’s economy. Over four million people visit Sedona every year drawn by the magnificent scenery and the outdoor activities available.

Sedona has also become famous for “spirituality”. One person responsible for initiating the emphasis on spirituality was Margurite Brunswig Staude. An artist, Staude was a devoted Catholic and found herself inspired to capture her spirituality in a church patterned after the cross. She decided to build the Chapel of the Holy Cross in memory of her parents. The Chapel of the Holy Cross is one of Sedona’s most visible landmarks today. Check out the Scenic Sedona Tour which includes a stop at this famous chapel.

The spirituality of the Sedona area also encouraged less traditional practitioners of religion. Sedona had become known as a center for “New Age” consciousness. The New Age movement hit its peak in Sedona in 1987 when thousands of believers descended on the town to witness the “harmonic convergence” of the planets.

It is believed by many people that the region of Sedona contains a concentration of vortexes which are spots that release psychic energy or power from the Earth. The four local points which are considered to be energy vortexes are Bell Rock, Table Top Mountain, Cathedral Rock and Boynton Canyon.

Sedona is also very popular among artists. It serves as a location for all different types of artistic interpretations. Hundreds of well-known artists have called the red rocks home. In 1950, surrealist painter Max Ernst moved to Sedona, and other famous artists followed. Many artists have been attracted to Sedona and it’s rugged beauty which is said to enhance their creativity. Over the years, an artist colony has developed in Sedona and many of the artists sell their work in local galleries and shops. Check out a few of our favorite artists, Marlys Mallet & Michael Redhawk at www.marlys.org, Peggy Sands at www.peggysands.com

With all the change Sedona has seen since its beginnings, the one thing that has remained the same is it’s incredible beauty!